Some other findings from the survey, which was conducted in June 2022 and surveyed more than 1,000 American workers, include:

Though the United States economy isn’t officially in “recession” territory, there has been chatter over the first two quarters of 2022 around the state of the economy. Inflation has been a key part of that chatter. As the two economic terms start to increase in conversations, the study found that 42% of workers are equally concerned about the impact of a recession and inflation.

Given inflation is a present fact and the economy has not officially entered a recession, let’s look at what the chances are of one happening.

What Are the Chances of the Next Recession?

Many of these fears about job security stem from the belief a recession is all but guaranteed. The next recession is less of an “if” and more of a “when” based on expertise from across the economic landscape.

The NBER is the organization that declares a recession in the economy. Though a recession is generally defined as a period of downward or weak economic growth, according to Investopedia, factors considered in determining one include:

Some more striking language has been used to describe what’s coming for the economy. Jamie Dimon, the CEO of JP Morgan Chase, said that there is a “hurricane” coming for the economy, warning a group of investors and analysts they should “brace” themselves for what is to come. Robert Shiller, a lauded economist, said there is a “good chance” the United States will face a recession.

The last non-COVID-related downturn in the United States came in the late 2000s with the crash of the housing market. The economic downturn afterward was dubbed The Great Recession due to the impact it had on economies in countries across the world, and it was the worst economic downturn in the United States since The Great Depression in the 1920s and 1930s.

Many baby boomers and Gen Xers worked through the The Great Recession, and many millennials were just trying to enter the job market or recently entered the job market at that time. Given another recession may be on the horizon, that’s now leading to The Great Apprehension–a time when workers are apprehensive about their job security and financial well being should a recession happen.

Millennials especially have fears of what the job market will look like in the future. The survey found 60% of millennials “say they still feel anxious about job security or say the fear of being laid off is often in the back of their minds.” That was the highest percentage among any generational group.

In fact, workers are so worried about getting laid off, over half of workers don’t think their job is recession-proof (52%) and say they’d take a pay cut to avoid getting laid off (54%). Just one in every four workers who were employed during The Great Recession say they have “several” backup plans if they get laid off.

Many of these recession fears and anxieties are warranted, though, based on survey findings.

Nearly nine out of 10 managers (87%) said they would “likely” have to lay off employees during a recession. There are already large companies laying off employees or freezing their hiring before the economy enters an official prolonged downturn. In fact, layoffs can beget a recession, as unemployment rates are a factor of what determines a recession as we discussed.

Insight Global CEO Bert Bean believes layoffs should be an “absolute last resort” for companies. “Instead, I encourage leaders to consider other solutions, such as building a plan that avoids layoffs and helps you grow through a recession. Get your employee base executing on that, because when you bounce back from a recession, you’ll need your people more than ever.”

“I realize not all leaders have the will to do this,” he continued, “but if you do, you will be shocked and amazed by the performance of your people when they feel this kind of safety and loyalty.” 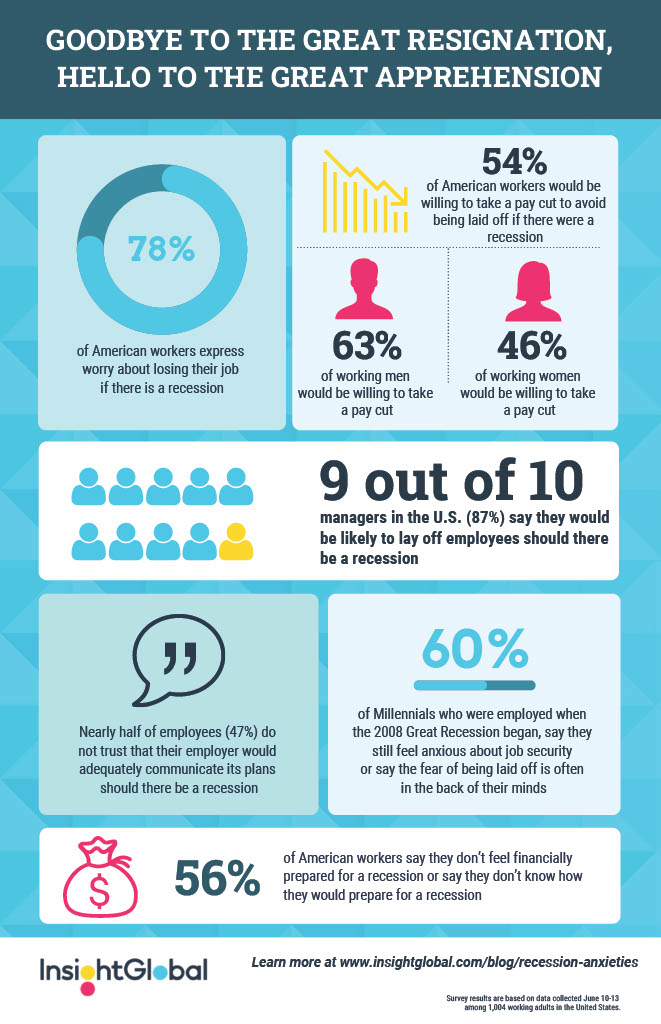 Lack of Trust… in Communication

Should a recession happen, the survey found that nearly half of employees (47%) don’t believe their employer would adequately convey its recession plans, and an astonishing two-thirds of managers don’t think senior leadership would convey its plans.

Bean believes, though, companies should be as transparent about its plans to its employees as possible.

“If your company hasn’t established a recession plan yet, make sure you do it now,” he said. “Communicate it with your employees and start acting on it.”

If you need assistance, check out our article on developing a recession plan.

The margin of error fell within +/- 3 percentage points with a confidence interval of 95 percent. The fieldwork for the online survey took place from June 10-June 13, 2022. Atomik Research is an independent creative market research agency.

For more coverage on the survey, check out reporting from Bloomberg News, Fortune, Business Insider, CNBC, and Newsweek.

Reach out to Lisa Ptak at [email protected] for full survey results.