This article was originally published as The Wall Street Journal Custom Content.

For a long time, Adam Newsome, CEO of Georgia-based logistics management firm Lazer Spot, sensed something was wrong at his 25-year-old business, but he couldn’t quite put his finger on it. The company was growing fast and was financially successful, but employees weren’t enjoying their jobs and spent more time sniping at each other than they did working together.

The root cause, he knew, had less to do with the individuals in his workforce than it did with his business’ overarching culture. “I feel like great companies have a magic to their culture, and people want to be there,” Newsome says. “They want to speak up, solve problems and foster an environment of innovation.”

For Newsome and countless other leaders, a constructive working culture is more than a nice-to-have. It’s increasingly taking center stage in the war for talent. As millions of people leave their jobs in the Great Resignation, more employers are waking up to the key role culture plays in hiring and retention.

According to a recent MIT study, a toxic corporate culture is 10.4 times more powerful than compensation in predicting a company’s attrition rate compared to others in its industry. Another, from the Society of Human Resource Management (SHRM), notes that 76% of employees say their managers should define what culture looks like in their workplace. Those types of realizations encouraged Newsome to seek a partner to help Lazer Spot make a change, and he found one in the Atlanta-based staffing services firm Insight Global.

“Post-pandemic, companies are looking for real solutions rather than just checking a box or paying lip service to the idea of culture on their website,” says Steve Wasik, vice president of culture for Compass, a division of Insight Global that helps companies create cultural change.

As Wasik sees it, culture is the sum of employees’ thinking, beliefs and shared values. It influences how they behave, how they’re expected to operate and the decisions they make.

“Culture is based on shared learning as an organization,” he says. “That’s often not talked about, but it’s critical to understand how learning drives results for people and for the business.”

Change Starts at the Top

Compass was born out of Insight Global’s decision to make a cultural shift within its own organization and better connect workplace practices to its own values and purpose. In 2020, the consultancy was struggling from a retention standpoint: That year, it hired 1,600 people, but 1,100 left. “If you were to visit one of our offices at the time, you’d have the hollow feeling that people were faking it and weren’t genuinely there to get results,” Wasik says.

Its efforts resulted in a sweeping reinvention that won Insight Global accolades as one of the country’s best places to work. In response, the firm launched Compass as a way to help other companies adopt its ideas and techniques. Instead of using a traditional engagement survey or training, Compass does a deep dive with a company’s executive teams, which dedicate time to connect with each other, identify their shared purpose and discuss how to achieve the results they want.

From there, leaders are tasked with modeling behavior for the rest of the organization while creating time and space for individuals to examine their own workplace practices. This provides the foundation for team-based improvement plans that connect shared learning and results, providing a pathway to a stronger culture.

“It’s a time to open up, be vulnerable, and express fears, doubts and concerns, but then commit to positive actions to solve hard problems, improve the culture and bring noticeable benefits to the organization,” Wasik says. 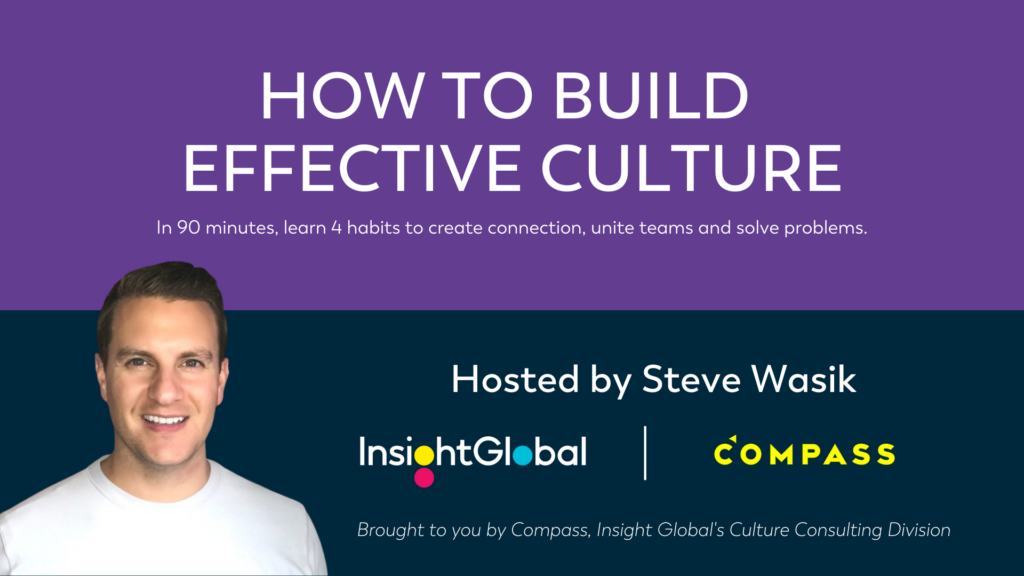 Edgar H. Schein, a professor emeritus at MIT and a pioneer in organizational culture leadership, says companies often use a flawed approach to evaluate their culture. “Companies have these very short questionnaires that ask things like, ‘How do you feel about how the leaders in the company communicate with you?’ And they will say the results show whether they have a culture of high communication or low communication, but the data, this ‘high’ versus ‘low’ distinction, is nonsensical,” he says. “A check mark on a survey is about the worst way to get at culture.”

Instead, Schein advocates the workshop approach, where managers discuss what they do and why they do it. Having a thorough understanding of the dynamics of their culture can be a competitive advantage in and of itself, but it also gives managers a clear view of how to make improvements.

For Newsome, this structured, straightforward method was combined with a thorough culture survey. It revealed the inner workings of his firm—where, despite rapid growth, employees lacked the framework to collaborate effectively or provide constructive feedback.

The guided sessions with managers also resulted in some appealing insights. “What surprised me was how much passion our team expressed, how much they cared about the business and how they wanted it to be better,” Newsome says. The prioritized feedback from sessions with managers was shared with a group of improvement teams that support what they call the “Lazer Journey.”

Culture is a complex topic that can manifest in countless ways, from how a company celebrates achievements to how employees are informed about important decisions. The impact of culture can be just as broad. It can ripple through an organization, affecting how employees feel, work together and communicate with one another. These factors contribute not only to hiring and retention, but also to the bottom line—with one SHRM report putting a $223 billion price tag on the cost of toxic culture to businesses over a five-year period.

For Lazer Spot, solutions to improve its culture took shape quickly. A few years earlier, the company had stopped running a managers conference. Sessions with Compass revealed that employees missed the connections and relationships they built there. When the conferences were reinstated, several of them told Newsome how much their jobs had improved as a result.

“Once we started focusing on the behaviors we wanted to get rid of, it became fairly obvious what to do,” he says. “How can we promote diversity and equality? How can we make sure female workers feel safe? How can we learn to be more patient with each other?”

After only a few months, he can already feel the change at Lazer Spot. He views its cultural evolution as a win for both the business and its workforce. “There will be improved financial performance, better retention and other benefits that come out of this,” Newsome says. “But when I walk into a room, I also want people to be glad to be there and be willing to work together to solve problems.”